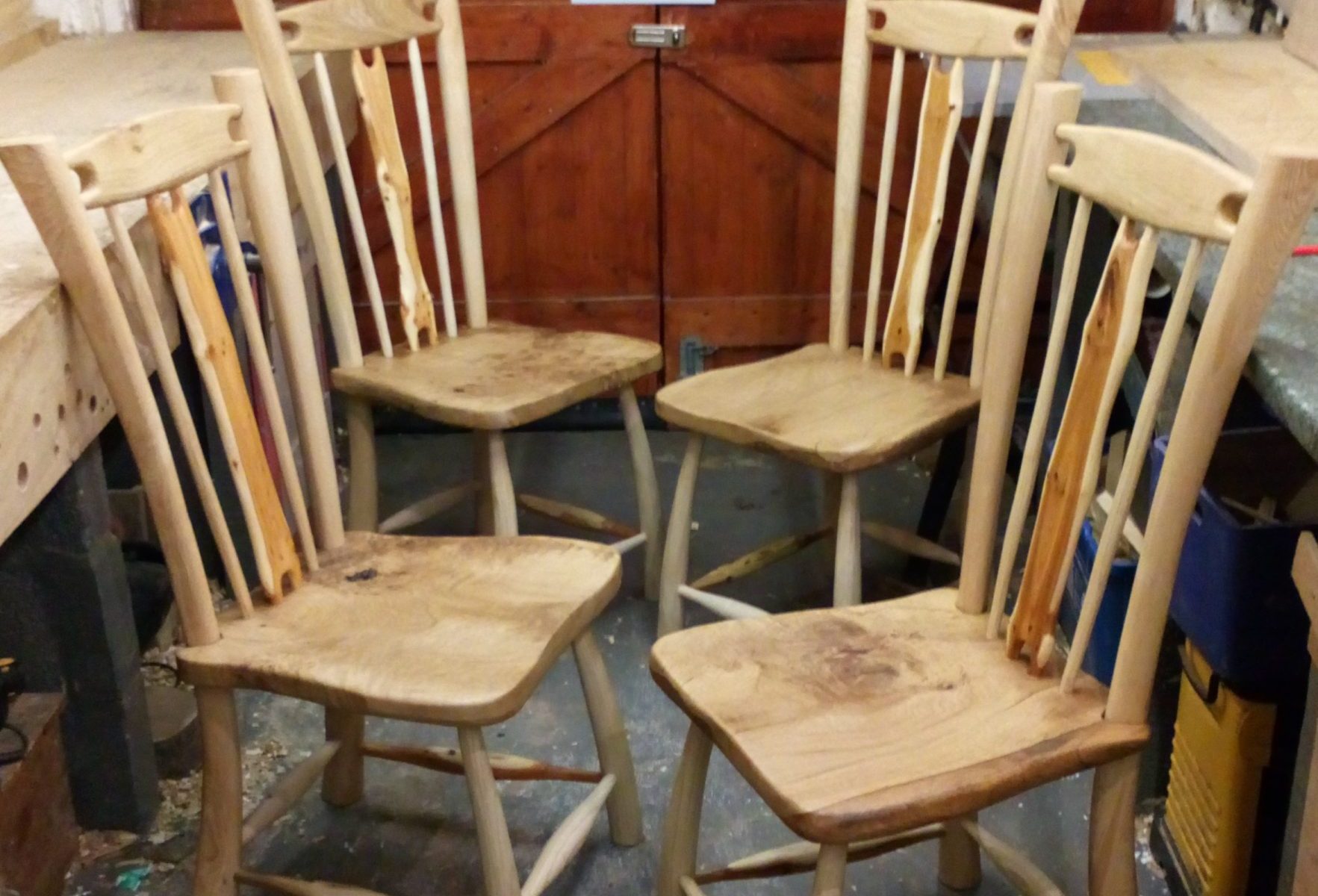 As you can see I have finally manged to complete the first four of six dining chairs. It is very difficulty to decide when to put down the sand paper or oil cloth and there is always more that can be done. 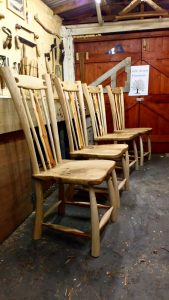 It has been a long and quite challenging process and one from which I have taken a great deal. New ideas have been tested and found to work, old methods have been discarded and not missed. I can honestly say that these are the most ‘Little Acorn Style’ chairs I have ever made.

I anticipated that the biggest issue would be in making them all ‘look the same’. To this end I developed the system of templates and used a small band saw to cut identical blanks from the seasoned slab wood. From this point onward everything was shaped entirely by hand and I soon stopped worrying about how exactly I was replicating each piece. The joy of green wood working is to allow the material to have its own influence on the character of the finished piece, and this is exactly what I did. The chairs would be ‘a matching set’ but each one unique inits own right. 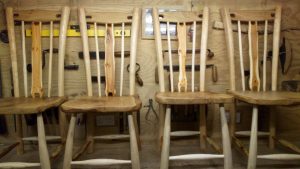 The biggest technical challenge  was then to get the geometry of the already individual chairs to be the same. It was specified that two chair seats be approximately 2 cm higher than the others whilst the backs remained the same overall height.  The chairs were all assembled individually and the latest chair checked against the previous ones for accuracy. For the first chair several mock ups were made until  I had worked out a combination of angles that seemed to give the correct feel and appearance. The  first chair was by far the most challenging and set the bench mark for the others. 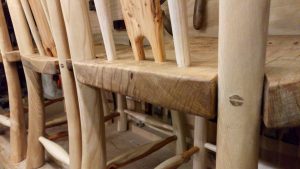 The comb and splat each have four hand carved tenons and it is is these I feel that give the chairs the distinctive appearance that I am very pleased with indeed. 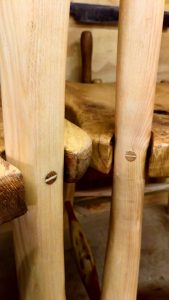 The ash wedges used in the visible oak pegs on the rear legs is also something new for a chair, I have secured table tops in the is way in the past but never with such contrasting materials. Securing the back legs in this way was supposed to be quicker and easier than adding stretchers directly below the seat, I am not at all sure if this was the case. I feel that it is a more elegant and equally robust solution, that I will be continuing to refine and use.

So what is actually involved, nearly eighty pieces of wood, all oak, ash and yew from the south Devon area. 16 pieces turned green on a pole lathe for the stretchers, 8 pieces hand carved from seasoned oak for the seats and combs, 8 back legs cut and carved from seasoned ash.  8 spindles and 8 front legs cleft and shaped from green ash.  4 cleft yew splats shaped with draw knife and spoke shave. A total of 16 hand made wedges, eight in ash and eight in oak, and 8 oak pegs. And of course the two butterfly joints used on the first seat. 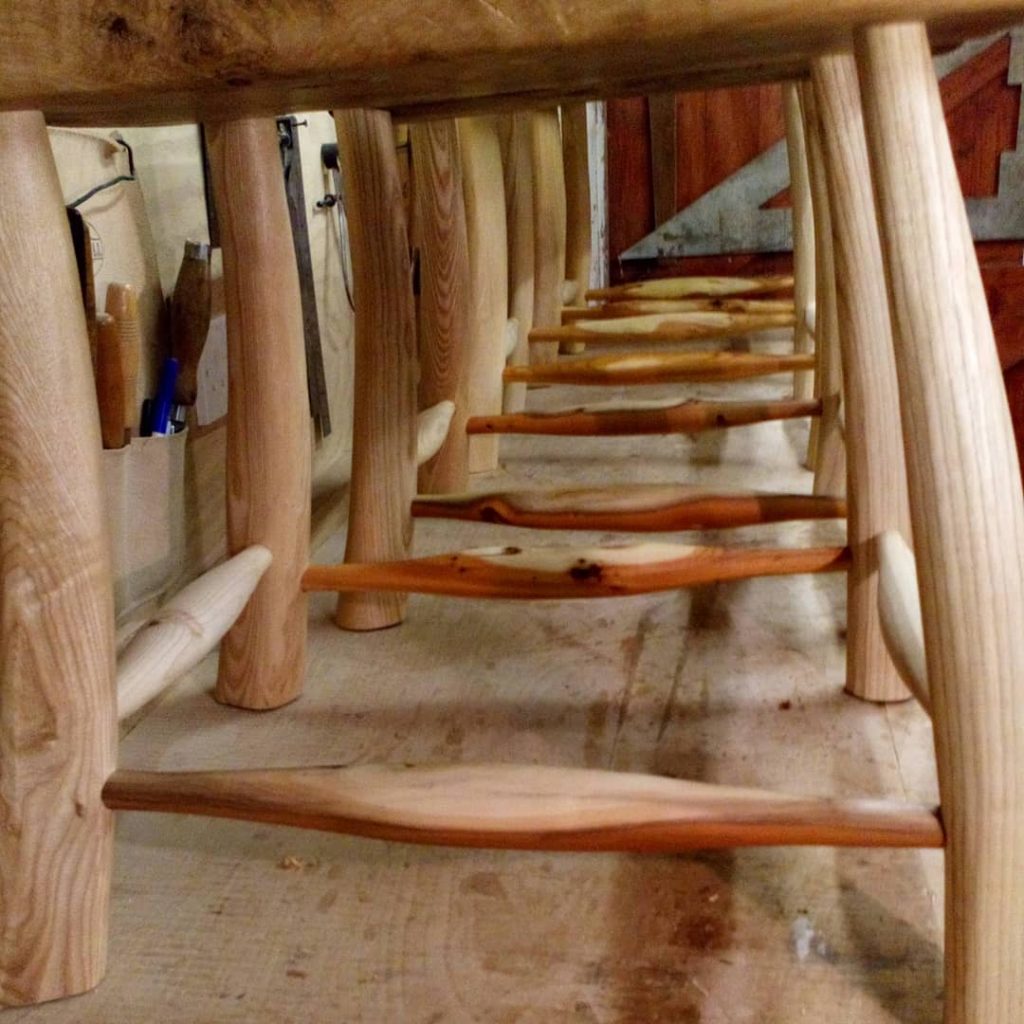 One Reply to “Four finally finished”

Used the #minimill again last week to resaw this o

Some happy people with their creations from recent

Did a little bit of this today. No matter how much

Finally got this arch and gate installed. Lovely c

Milly keeping out of the way while we fell some ch

Me humping Ash around in preparation for yet anoth

Over looking Fingle wood from #cliffordbarton the

Two more shaving horses came into the world this w

We were lucky enough to have the incredibly talent

Going to miss Ash when it's gone #controversial #s

Another great #familycourse with this bunch, plent