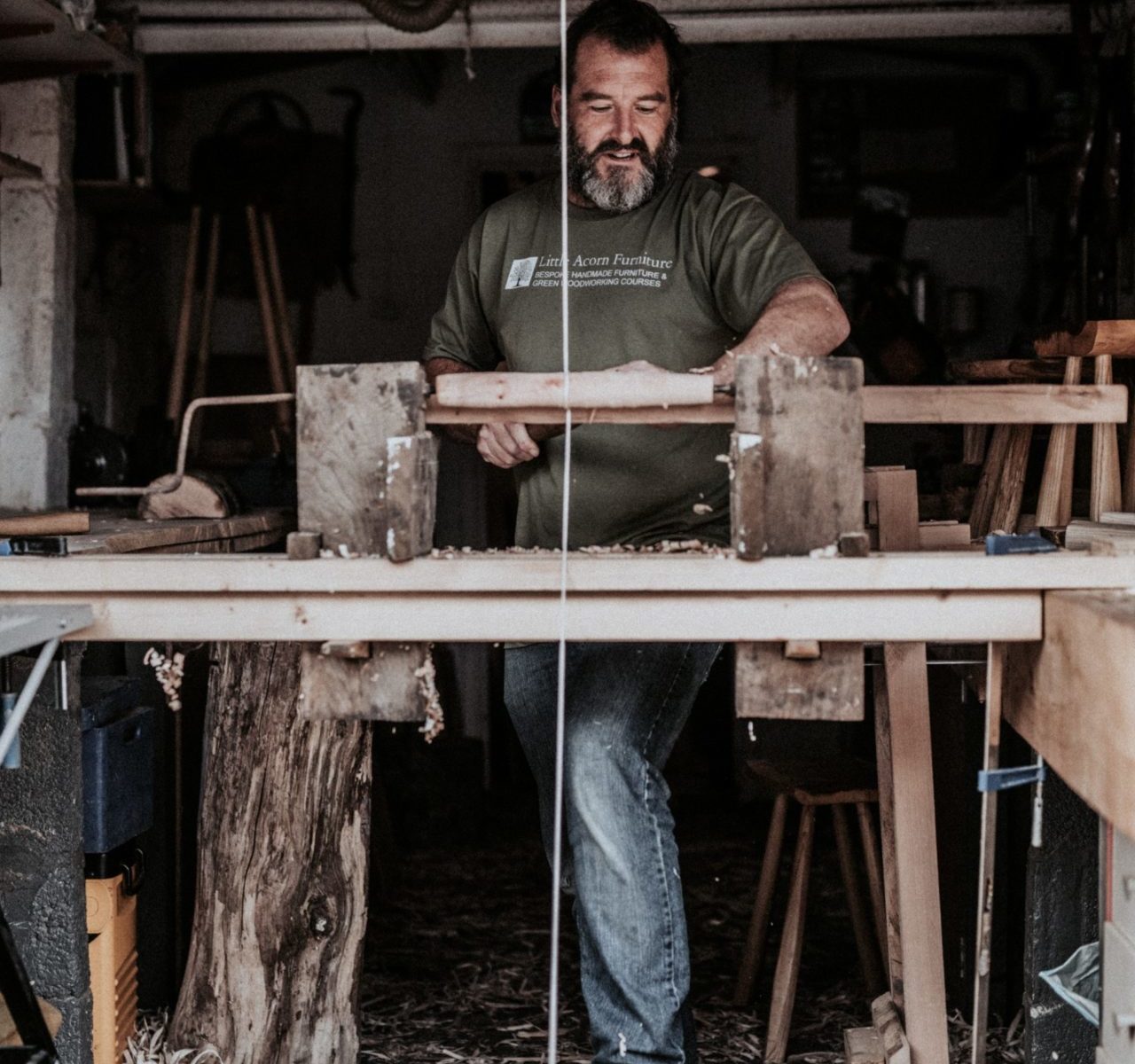 A pole lathe is an ancient form of turning that easily dates pack to the medieval period in the United Kingdom and relies solely on the power of the operator’s legs and the natural spring of a freshly cut ash pole to turn the wood between two poppets. In its heyday pole lathe camps or “bodgers” camps as they later became known,  were a common site in woodlands throughout the south of England. Woodsmen would live near but rarely in the camps, unlike charcoal burners who were required to spend days on end tending their fires, a bodger was free to return home at the end of the day. Working from dawn till dusk a typical bodger would be required to produce one gross (12 dozen or 144) turned items from the trees within the woodland each day. The turners would make the components for chairs which would then be sold to craftsmen and later factories for joining together into the finished article. It this fact that a bodger never finished a job that may have given rise to our common use of the term, the notorious bodger who does half a job often badly. Despite this misconception bodgers were hard working craftsmen whose skill sadly died out with the advent of mechanized factories which in turn inevitably led to the decline in local distinctive styles.

A pole lathe consists of an ash pole supported on two cross pieces and secured to the ground with a peg at one end. The free end sticking up into the air at around 45 degrees has the cord attached to it which passes around the piece to be turned and attaches to a treadle operated with one foot. The piece is secured between to poppets which in turn are supported by a frame known as the bed. When downward pressure is applied to the treadle ash pole is bent downward,  and the cord around the wood causes it to spin on the metal spikes of the poppet towards the operator.  It is on this down ward stroke that the chisel is used to shape the wood. When pressure is released,  the ash pole returns to its original angel drawing up the treadle and spinning the wood in the opposite direction, during which the chisel is held away from the wood. This reciprocating action produces a very pleasing rhythmic motion which although it may sound complex is very easily picked up.

Turning on the pole lathe produces the required shape but it is essential that the green components made in this way are left to dry before they are assembled. This will ensure that no further shrinkage takes place and that the resulting joints will be secure and  long lasting. The process of shrinkage and joining are covered in detail on the tree to table and chair making course. Once the wood has been turned, there are many more exposed capillaries and the drying process can be quite rapid allowing secure joints to be made within  a few hours with the help of a simple drying kiln.